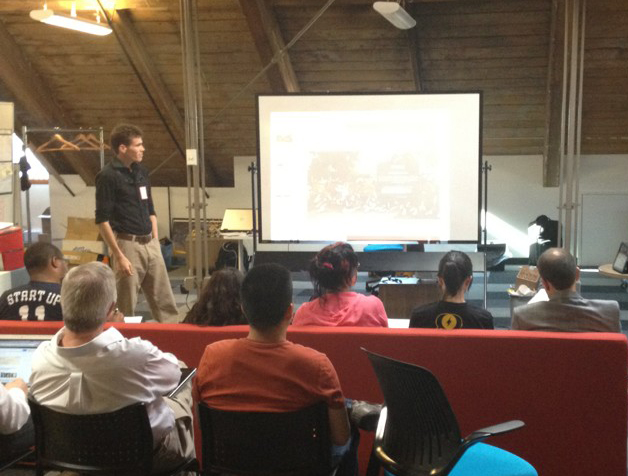 The Lean Startup Machine is unstoppable. The world’s only bizdev hackathon is a supercharged engine of scientific innovation, plowing relentlessly through new startup communities every month and obliterating our romantic but outmoded notion of entrepreneurship. Its coordinators, festooned with Lean Startup tattoos and clad in bold black and yellow tees like piratical bumblebees, burn their evidence-based ideology onto fresh brains with electifying intensity. This ain’t your corporate weekend workshop.

My team, Civic Hire, won this weekend’s competition thanks to a great set of team members, great mentors, and stellar support from prospective customers. Civic Hire makes it easy and riskless for international projects in developing nations to hire locally. The workshop was managed by young startup guns Rob, Ray, Grace, and Nate. Boston Startup School (BSS) coordinator and TechStars associate Shaun Johnson judged alongside Microsoft’s Abby Fichtner and others.

“Anybody starting a new venture is doing themselves a disservice if they don’t make their way to a Lean Startup Machine workshop,” declared Trevor Lynn, a Sales/Bizdev student at BSS. “LSM throws any idea through a rigorous gauntlet to see if it can survive and come out the other side, but more importantly, it puts the entrepreneur behind the idea through a mental gauntlet as well.”

On the surface, the Lean Startup Machine (LSM) is a 48-hour team competition to achieve the greatest market validation for a startup idea. But the contest is just a format purpose-built to convey the concepts of Eric Ries’ Lean startup methodology - plus tweaks and tools added by the LSM staff. One of these tools, the Validation Canvas, is being iteratively tested (#lean, anyone?) as the central strategic tool of each workshop. Expect the Canvas to generate tidal waves across the Lean community when it is released to the public. 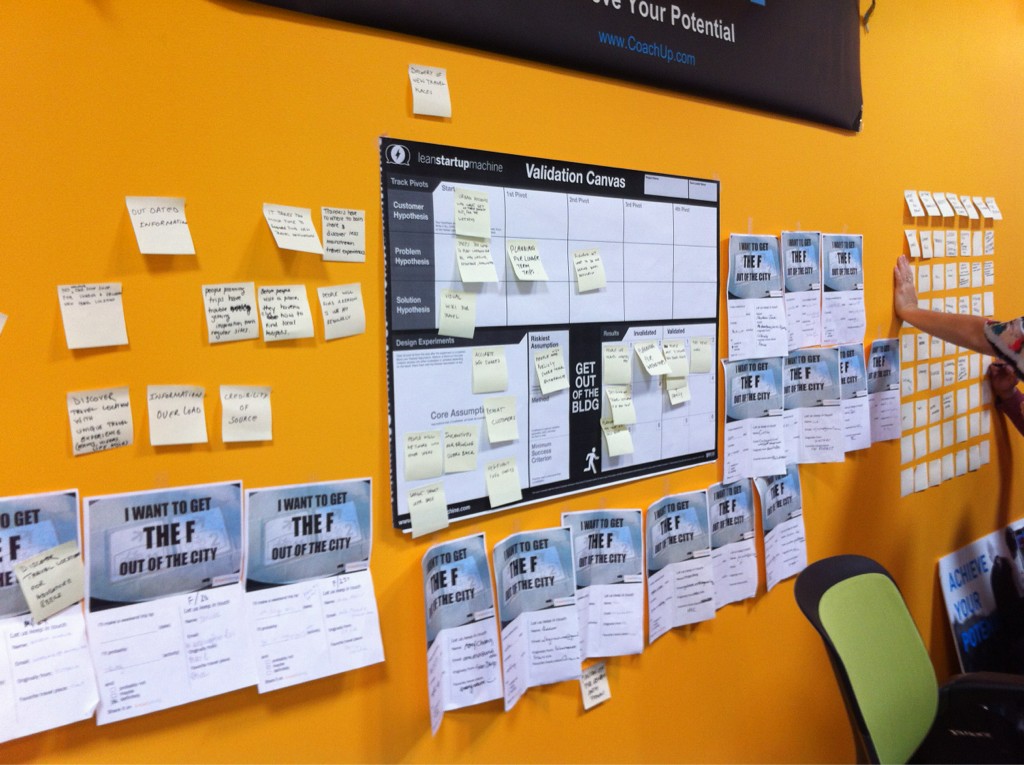 “I have been to many workshops and seminars, but I have never been to something as intense and fulfilling as LSM,” said Luis Duco, another BSS student. “We did so much in the time we had, it made us wonder what would be possible if we worked together in the real world.” Duco’s entry, entitled ‘Are You Happy With That Parking Job?’, imposed a social tax on inconsiderate parkers.

I had the opportunity to attend the LSM Boston thanks to the generosity of its many sponsors and especially Boston Startup School. Like most hackathons, it begins with a pre-event pitch night so that teams can coalesce around the best ideas. After my own pitch quietly failed to make an impression on anybody, I formed a partnership with another unsuccessful pitcher who had also presented an idea with social impact.

We merrily set out to build Monster.com for NGOs (nonprofits) and were instantly stopped in our tracks by the LSM mentors, who prowl the room looking for untested assumptions to pounce upon. Some brief testing was suggested. On such a limited time budget, LSM tests include surveys, nonfunctional beta pages, SEM and many other bizdev hacks. Sure enough, we discovered that hiring managers at NGOs didn’t want our idea so much as a solution to their problems.

Mentors wear a variation of the black-and-yellow tee that reads “GET OUT OF THE BUILDING” - possibly making the LSM unique as the only workshop that physically ejects its attendees from the premises. So as I made calls across half a dozen time zones to coax NGO managers into telling me their hidden woes, other teams were sent forth to harass validation out of potential customers in the streets, malls and parks of Boston. 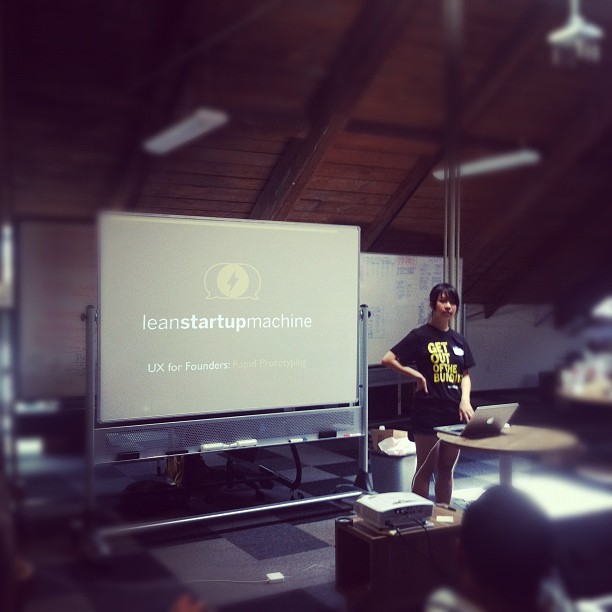 "Get out of the building. No, seriously, I mean it."

There are no rules at the LSM, but victorious teams are scientific every step of the way. So experiments were conducted across the city: Duco and his team tested an experiment involving ludicrously inconsiderate parking jobs in Kendall and Lynn’s partners dropped jaws in the Common with a highly polished music discovery application. Cold calls were made, doors were slammed in faces, A/B test sites tried to go viral, surveys were refused politely and impolitely, but the LSM’s goal-centric testing procedures steadily transformed messy real world data into actionable iterations until, bit by bit, a product could emerge.

“You will not validate or invalidate your idea by just sitting in the room and discussing amongst your peers,” said Vik Shah, a software development student at Boston Startup School. “Get out and start interviewing as many people as possible and see whether there is a need for the product or not.”

“Entrepreneurs love to validate their ideas with friends or just generalize that their assumption is so simple that it’s not worth testing,” agreed Lynn. “Most entrepreneurs would shy away from hitting the streets to validate because rejection is a strong outcome, but rejection means invalidation and invalidation means you have to pivot – the idea of pivoting away from their original vision is painful for entrepreneurs.” 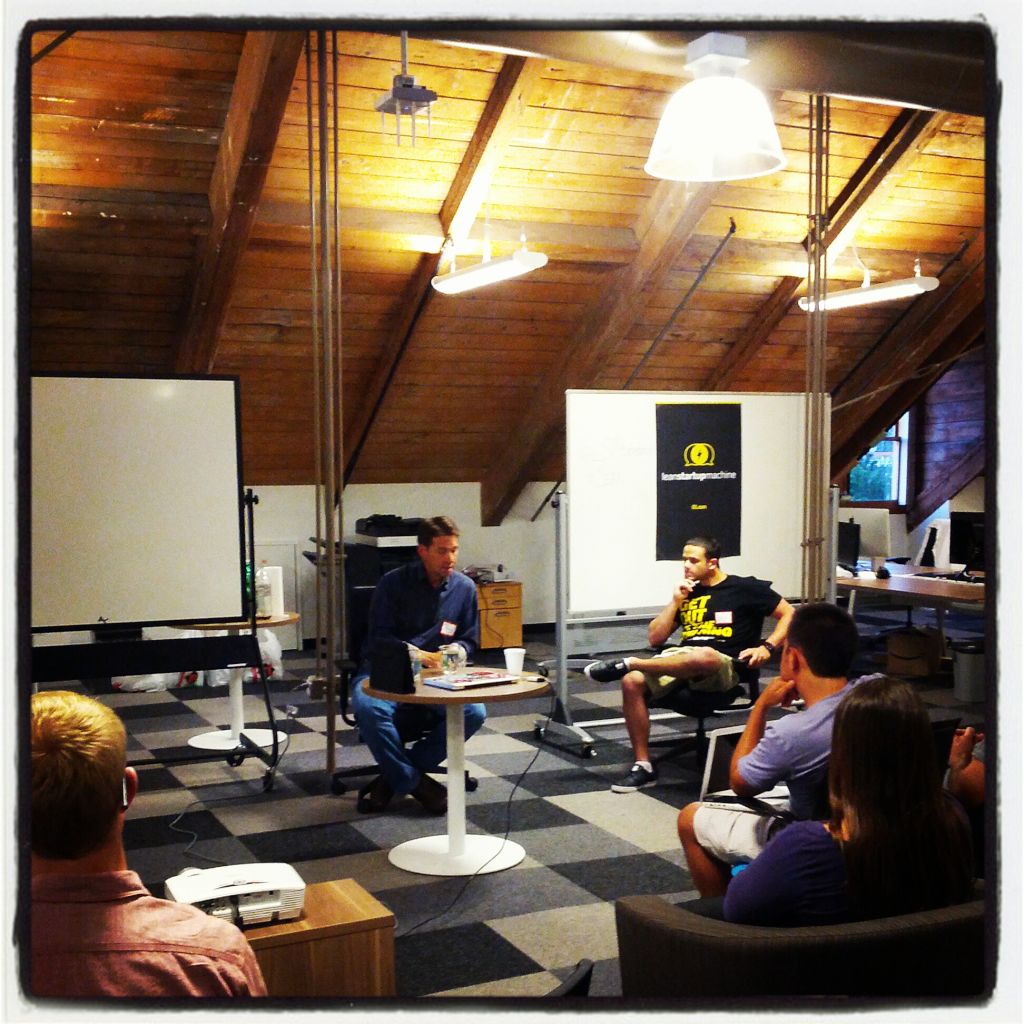 Fireside chat minus the fire. Could have used business plans.

The culmination of the event is a series of five-minute pitches. One team member has five minutes to present five slides with a very specific objective - tell the story behind iterations to show how market response shaped the product. Mentors enforce this objective with a battery of rapid-fire questions after each pitch. As our preparation time grew short, my team frantically tried to recall what in the world we had been thinking when we made those first assumptions about NGOs. My memory seemed to stop working. I scrawled my talking points over and over again onto post-its. The actual pitch was a blur, and then it was all over but the afterparty.

By the end of the weekend, I was elated and exhausted. Like all truly great concepts, the LSM’s methodology seems laughably simple in retrospect. And like the rest of the participants, I will be completely unable to resist applying these methods everywhere in the future - especially this week at Boston Startup School, where I’ll be combining daily insights from top startup developers and hot Boston CEOs into a weeklong ‘IdeaJam’ team competition.

“LSM is a shock to the system,” summarized Lynn, back at BSS. “A weekend at LSM is like jumping into cold water - after you do it once, it’s not as cold then next few times. It’s a process in which once it’s over, you come out the other side fearless of rejection and addicted to validation.”

Best of luck from everyone at Boston Startup School to the Lean Startup Machine staff as they continue to spread their cult of startup across the globe one assumption at a time.